For question number 1, please look at the chart.

(女) Let’s look at the sales figures for the J-Call phone cards for the first three months of this year.
(男) Sure. This graph compares sales in the four major cities over that period.
(女) OK. Well, what concerns me is the slump in sales in February in one particular location.
(男) I understand that, and we’re looking into the reason for that drop, but at least we regained sales volume a little there in the following month.

Question: Which city are the speakers mainly talking about? 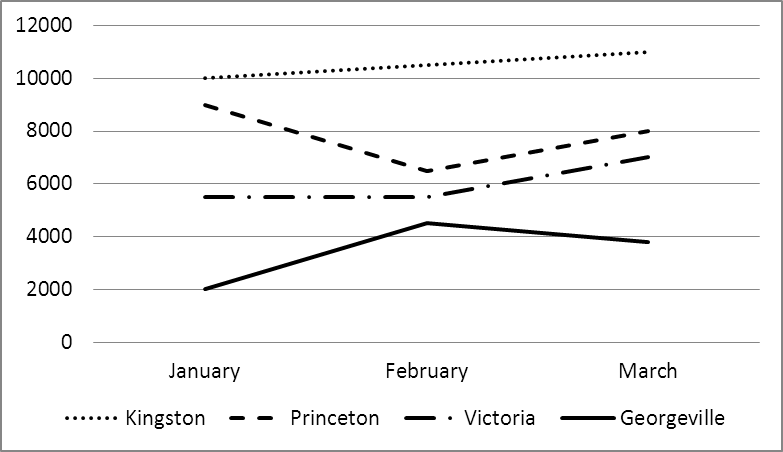 Questions 2-3 are based on the following conversation.

(女) I didn’t see that coming.
(男) Neither did I. All throughout the negotiations, they’ve been quite firm in their demands. Why would they make such a major concession now?
(女) They’re obviously more eager to conclude a deal than we thought.
(男) Yes, but I’m suspicious of their motive. There must be some advantage for them that we’re overlooking.
(女) I think the best thing for me to do now is give our legal counsel, Karen Mitchell, a call. She said to contact her if anything unforeseen occurred.
(男) This definitely qualifies. Do you want me to give you some privacy?
(女) No, you can stay here and listen. Then I won’t have to explain to you what she says before we go back inside.

Question: What is the main subject of this conversation?

Question: Why will the woman telephone Karen Mitchell?

For questions number 1 and 2, please look at the table.

Good afternoon, drivers. This is City-Bus control center. Here’s an update on the problem in Parking Lot D. As I reported earlier, one of our shuttles was hit by a car whose driver refuses to move his vehicle until the police show up. Slow down when you drive past it. Also, we’ve received complaints that buses are not adhering to the schedules. I know traffic is heavy today, but do your best to arrive and depart promptly. Finally, a woman left her purse on one of the buses but doesn’t know which one. She was sitting in the back of the bus. Please see if it’s in your bus when you can. Whoever finds it, please contact me by radio as soon as possible. Thanks for your attention. Drive safely!

Question: Why is the incident in Parking Lot D likely to remain unresolved for some time?

Question: Based on the announcement, which situation should appear in the shaded area?

Most of the paintings on display _______ Paris and its residents’ typical pastimes.
A. verify
B. amend
C. convert
D. depict

In this modern age, it would be difficult to find someone unaware of Snoopy or Garfield. Their fame is partially ___(1)___ their daily inclusion in newspapers around the globe. Comic strips, sequential cartoons that express a story, first appeared in newspapers in the 1890s. Since then, they have gone through countless transformations. In 1900, comics adopted the use of balloons ___(2)___ dialogue appeared, a technique that has persisted until the present. ___(3)___ in the 1920s when comic strips were gathered together and published in inexpensive books. By that time, adventure comics, especially detective stories such as Dick Tracy, ___(4)___ a wide audience. In the 1930s, comics about superheroes appeared on the scene. Superman was the ___(5)___ of this genre, but the “man of steel” was soon followed by Batman and other crime-fighters. Comic strips have had a long and vibrant history, and they continue to be a unique and important form of entertainment.

Questions 1-5 are based on the information provided in the following article and journal entry.

1. What does Ortega imply about Oslob?
A. Its seafood industry is growing.
B. It boasts a popular tourist attraction.
C. Its laws are carefully enforced.
D. It was blamed for the over-fishing.

2. According to Ortega, what is a major concern about Oslob’s whale sharks?
A. They live in a contaminated environment.
B. They are socializing with one another less.
C. They no longer have access to a diverse diet.
D. They are becoming increasingly aggressive.

3. Why does Ortega discuss the consumption of krill by whale sharks?
A. It relates to changes in whale shark behavior.
B. It can result in damage to whale shark habitats.
C. It could save whale sharks from starvation.
D. It is the main cause of whale shark injury.

5. What do both Sandy and Ortega acknowledge about whale sharks?
A. They are supposed to cruise the ocean.
B. Hunting is an ongoing threat to them.
C. It is harmless to swim beside them.
D. They are easily startled by camera flashes.